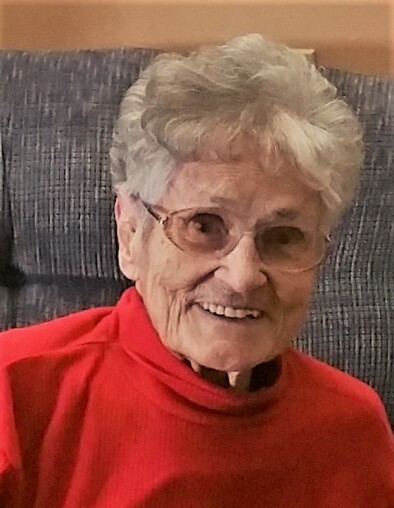 Mary Lou Wadsworth passed away in her sleep at the age of 94 on Sunday, July 11, 2021 in Wheat Ridge, Colorado.  She was born on June 1, 1927 in Stephenville, Texas the daughter of C.E. May and Bertha Stell, and was an only child.  She grew up in Carrizozo, New Mexico and then married her first husband, Loren K. Schwab in October 1945.  They had two children, Kenneth and Michael.

They lived in Kiowa, Colorado on a small ranch and held a yearly summer barbecue of elk and venison from their hunting successes, which many neighbors, friends and family enjoyed. During their time here, she volunteered as a judge at the Elbert County Fair for many seasons and also at the local Senior Center.

Mary Lou obtained a Bachelor’s of Arts Degree at D.U. University in 1968 and then worked as a secretary at Martin Marietta.  She studied Spanish and many summers would host a foreign exchange student to live on their ranch.

Her husband Loren passed away in December 2002 and she remarried Clyde M. Wadsworth and moved to Carlsbad, New Mexico, a place of warmer weather and near remaining cousins.  After Clyde passed away in April 2013, she moved back to Colorado in August 2017 to Mountain Vista Health Center.

She is preceded in death by her parents, both her husbands, and her son Michael in December 2019.  Surviving family include her son Kenneth Schwab of Henderson, Nevada and her daughter-in-law, Lynn Schwab of Black Hawk, Colorado.

Cremation was performed and remains will be interred at Elizabeth Cemetery, Elizabeth Colorado.

In memory of Mary Lou, donations may be made to Mountain Vista Health Center with special gratitude to the staff for the loving care she received there.

A service summary is not available

Plant a tree in memory of Mary Lou Wadsworth

A Memorial Tree was planted for Mary Lou Wadsworth

Plant a tree in memory of Mary Lou Wadsworth